They Are Not Alone | SBCV Homecoming

SBCV demonstrates They Are Not Alone through sermons, stories, and service projects.

November 26, 2018 | Hampton, Virginia – “Over the past few years, the SBC of Virginia has stated clearly and emphatically that churches are not alone,” emphasized Dr. Brian Autry, executive director of the Southern Baptist Conservatives of Virginia (SBCV). “However, we join in gospel partnership not just for our mutual benefit but to reach our neighbors and the nations with the good news of Jesus Christ. We are not alone so they are not alone.”…

Here are the 2018 Annual Homecoming resolutions.

1: APPRECIATION TO LIBERTYLIVE.CHURCH, HAMPTON, VIRGINIA
2: PRAYER FOR THE PRESIDENT AND OTHER ELECTED LEADERS
3: APPRECIATION FOR THE ARMED SERVICES OF THE UNITED STATES OF AMERICA

THEY ARE
NOT ALONE

David Platt is the teaching pastor of McLean Bible Church in Vienna, Virginia. He previously served as president of the International Mission Board. David earned a bachelor’s degree from the University of Georgia, followed by master’s degrees of divinity and theology and a doctorate of philosophy from New Orleans Baptist Theological Seminary. He is the author of Radical, Radical Together, Follow Me, and Counter Culture.

Fred Luter, Jr. has served as senior pastor of Franklin Avenue Baptist Church in New Orleans, Louisiana for the last 32 years. He was the first African American elected as president of the Southern Baptist Convention. Pastor Luter has been married to his wife, Elizabeth, for 32 years, and they have two children and one grandson.

Edgar Aponte serves as vice president of mobilization for the International Mission Board. He previously served as director of Hispanic leadership development and professor of theology at Southeastern Baptist Theological Seminary. Prior to SEBTS, Aponte served as Minister Counselor at the ministry of foreign affairs in Washington, D.C., on behalf of his home nation, the Dominican Republic. In addition to undergraduate and graduate degrees in business, he earned a Master of Divinity from The Southern Baptist Theological Seminary and a Ph.D. in Theological Studies from SEBTS.

Professor of Evangelism, Executive Director of the Center for Ministry Training
Liberty University

Dr. David Wheeler is Professor of Evangelism for the Rawlings School of Divinity at Liberty University. He also represents the North American Mission Board as a field missionary on campus for church planting and church revitalization. Wheeler is the co-author of several books . . . Minister to Others, Evangelism Is, Great Commission to Worship, Worship and Witness, and Servant Evangelism.

Dr. Ben Gutierrez is the Professor of Divinity at Liberty University in Lynchburg, Virginia. During his more than 20 years of local church ministry experience, he served in many leadership positions in the Midwest and East Coast. Gutierrez has written or edited over one dozen books with some translated into Spanish and Portuguese. He has been married to his wife, Tammy, for 21 years, and they have two daughters.

Dr. Thomas has been the pastor of First Norfolk since 2003. He is husband to Eydie and father to four daughters. He has a passion for preaching God’s Word and helping those who are far from God find new life in Christ.

Dr. Brian Autry is the Executive Director of the Southern Baptist Convention of Virginia (SBC of Virginia). He previously started Parkway Baptist Church in Moseley, Virginia in 2002 and served as senior pastor. Brian received his bachelor’s degree from James Madison University, his Master of Divinity degree from Southeastern Baptist Theological Seminary, and his Doctor of Ministry degree from The Southern Baptist Theological Seminary. Brian and his wife, Jennifer, have three children, Melissa, Mark, and Jenna. 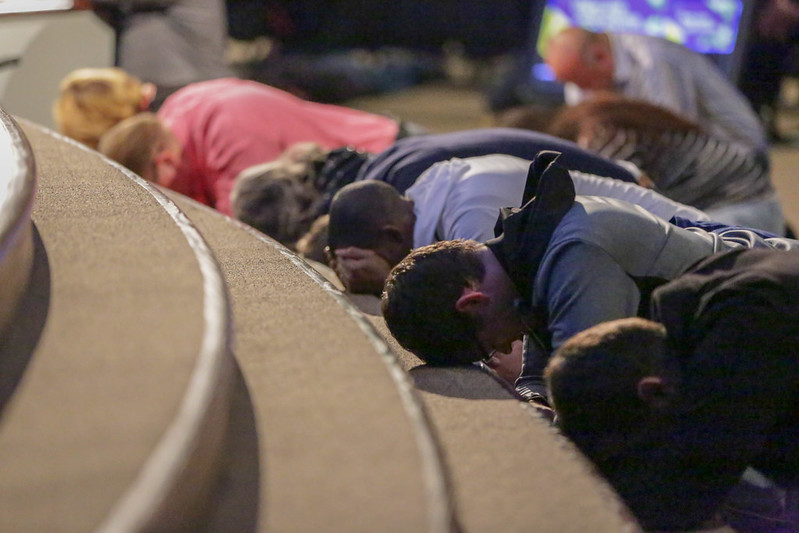 Official documentation for our member churches for the year 2018. Tells of God’s work through His people, gives an accounting of our stewardship of mission resources, and offers plans for our cooperative partnership.

Information and schedule for the SBC of Virginia’s Annual Homecoming at Libertylive.Church (Hampton), on November 11-13, 2018.

Is your church reaching its community?

There is now an interactive mapping system available that will prompt church members with ways to Bless Every Home. Signing up to be a light is easy and it is FREE!

Learn how to sign up and get started at sbcv.org/blesseveryhome.

PROMOTE ANNUAL HOMECOMING IN YOUR CHURCH

Strong Churches with a Bold Commitment to the Great Commission • #sbcvhome