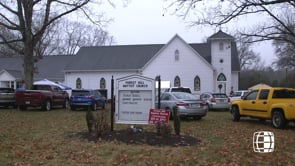 When Pastor Rick noticed twin boys riding their bikes around during his church’s outdoor Easter service he assumed it was going to be a distraction, but after they began listening it became the first sign of a blessing in disguise.

Rick Ragan, senior pastor at Forest Hill Baptist Church in Skippers, VA, had previously been having little success inviting two twin boys named Jayden and Jorden to visit church since they moved in across the street. When Forest Hill began holding outdoor services this spring due to Covid-19 limitations, the boys began showing up at services since they were happening outside near their home.

The boys eventually became enthusiastic about coming to church events, showing up whenever there were cars in the parking lot to see what was going on. Ragan developed a relationship with the boys and has had many Gospel-conversations with them during this year using LifeWay materials.

“If it hadn’t been for the pandemic causing us to go outside, I don’t think this breakthrough would have ever happened,” Ragan said.

Ragan began searching for an activity for the boys to get involved with in order to meet other church members, and to hopefully get their families more involved with the church.

Being a musician, Ragan started a boys’ choir for some of the young boys in the church to be a part of. Ragan said Jayden and Jorden’s mother has in fact come to see them sing multiple times since the choir began.

The choir started out this summer as three boys in the church performing. The choir was Jayden, Jorden and another 10-year-old boy named Carl.

Ragan said Carl has been attending their church for three years since his mother got saved through their witness. Carl was saved and baptized this past summer, which Ragan said has been the highlight of the ministry of the choir and he desires to see the same for Jayden and Jorden.

“My greatest desire is that these boys know Christ and be baptized, and that they become disciples,” Ragan said.

All three boys will be performing (performed) during the church’s outdoor Nativity service.

The surprise blessing of outdoor ministry reminded Ragan of the history of his church. Forest Hill Baptist was founded in 1918 by a small group of believers during the Spanish flu pandemic. The group met outside in a brush arbor, and eventually built the original church building in 1919.

Ragan said both the faith of those believers and the faithfulness of God serve as reminders to current church members to “try to be innovative and just keep going.”